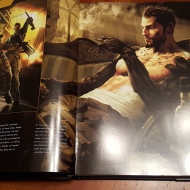 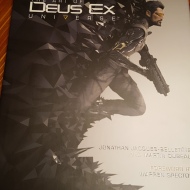 The Art of Deus Ex Universe

As a teenager, I loved sketching characters like Judge Dredd, Boba Fett and stormtroopers (not together in the  same scene, obviously). I particularly loved drawing Judge Dredd. I guess it was his hard-edge face with what seemed like a permanent scowl that was the attraction.

I always started with the helmet before I added in the respirator and the nose piece – and then it was pretty much just a solid chin with that scowl. Judge Dredd was such an interesting character to draw and it was only natural that my love of drawing pop culture characters (and studying art at high school)  would lead to me being intrigued by the design processes of video games.

I’m incredibly fascinated by how game makers start with a spark, an idea, and flesh it out into a full realised character as we see in a finished video game.

As someone who loves the design concepts and processes that go into video games, and a longtime fan of the Deus Ex series, The Art of Deus Ex is a fascinating 210-page book that delves deeply into the thought processes of the artists, designers and conceptual artists as to  how they settled on the final designs of characters and locations used in Deus Ex Mankind Divided and Deus Ex Human Revolution.

I bought the book from Amazon for about $NZ50 (including delivery) after playing through Deus Ex Mankind Divided, a game that had such a visually impressive art style that just had to have an art book that detailed the design process. I loved the game but I think I love the art book even more than the game.

The game opens with a section on Adam Jensen, the lead character in Mankind Divided and Human Revolution and a character that I actually liked despite many thinking he was a douchebag and it’s interesting that reaching the final visual look was a two-year process, says the book.

In it, Jacques-Belletete says Jensen had to represent “what it meant to have your body augmented way beyond its natural and biological capabilities”. The book shows how Jensen’s character evolved and changed over the design process, eventually settling on the cyberpunk look we see in the final game.

For gamers who want to see the process from ideas to finished project, a book like The Art of Deus Ex Universe is well worth the money. I just love seeing the sketches and concept art of the vision for what they want the game to look like. It’s fascinating seeing the transformations of characters from rough sketches to fleshed out as they look in-game.

The book covers everything from cybernetic implants and augmentations and characters like Frank Pritchard, Jaron Namir (from Human Revolution) and Elias Chikane to locations like Detroit, Prague, Sarif Industries and Hengsha. Fans of Human Revolution and Mankind Divided will be in heaven, as I was.

The Art of Deus Ex Universe is stunning from start to finish chokka block with highly detailled images – hopefully the images accompanying this post will do it justice – for gamers who love the process behind the games they play to pore over.

I’ve got several video game art books and I have to say that this one takes pride of place in my collection.