HP’s Omen X desktop computer makes me not want to play games on a console  or even my current desktop PC  ever again – it’s that powerful and that beastly.

Actually, the Omen X is a beast, both in respect to the hardware inside and the sheer size and weight of the thing. Seriously, this thing is a monster so make sure you have the room for it.

The review unit came running an Intel Core i7-6700 CPU [@4Ghz], 32Gb of memory,  and – get this – two (yes, two) nVidia GTX1080 GPUs. That’s a helluva lot of computing power, especially when placed alongside my home PC, which is running an Intel i7, 8Gb of memory and a many generations old GTX660Ti.

The Omen X’s cube shape isn’t going to endear itself to everyone with the way it looks but it’s nice to see a PC manufacturer looking outside the square (excuse the pun) when it comes to case design.

As the image shows, the Omen doesn’t sit on a side but is tilted on an angle  thanks to a build-in stand at the bottom.

Once I’d found the right spot for the Omen [on the floor, next to my day-to-day PC],  it didn’t look too out-of-place in the lounge were my normal PC lives  and blended in with its surroundings, at least until I turned on the in-built LED zone lighting that illuminates it with a variety of colours, that is  – then it became a visual focal point.

The lighting is controlled by a desktop app and you can have all four front panels shining the same colour or have a different colour for each one. It’s a nice touch, even if the app is a little finicky when you try to fine tune the colours using a wheel interface.

HP has thought about all the  heat such a monster PC will generate as well and thermal management includes a tri-chamber design to separate components and optimise thermals with dedicated cooling in each chamber. The Omen X  also includes support for up to three 120mm liquid cooling radiators with top mounted exhaust vents.

The way the Omen X sits on its stand also helps with airflow, meaning your gaming beast will stay [relatively] cool when the frame rates are ramping up.

A monster PC needs monster testing, so I found the most graphically demanding game I had to thrown at it. So, I tested the Omen XP on games  Titanfall 2 (EA), Battlefield 1 (EA), the new Tomb Raider and Gears of War 4, and benchmarked it using 3D Mark’s Timespy and Firestrike tests and UniEngine’s Heaven and Valley bench marking tools. All games were tested at a resolution of 1080p as that’s the maximum my LG IPA monitor can handle.

In terms of games, the Omen XP was able to comfortable handle perhaps one of last year’s most graphically demanding PC games, EA’s Battlefield 1 with aplomb, running the game at its Ultra presets in DirectX12 without skipping a beat. I guess with two GTX1080s it should be able to do that without running up a sweat.

Top be honest, the Omen handled Gears of War 4, Tomb Raider and Titanfall 2 all with the graphics settings at the highest possible, making for some stunning visuals, something my GTX660Ti can’t come close to. 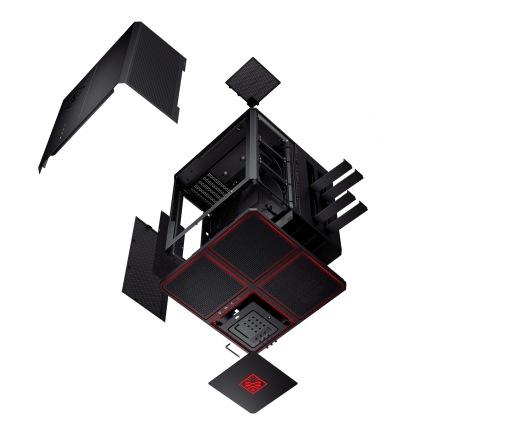 I loved the Omen X: It’s a beast of a gaming PC that in the review configuration will have no trouble playing any current or future game at its highest graphical settings. I like that HP has taken a risk with its design, too.

That power comes at a price, though.

Yes, the Omen X was blazingly fast and I loved playing games on it  – and it was sad going back to my usual desktop with its ages old GPU – but maybe I’m out of touch with how much a top-end PC costs [because I’m old?] but personally, $7000 is a crazy money to me to pay for a computer. If you shopped around  for components, chances are you could build a comparable PC for a much, much less.

That said, I doubt HP are targeting the PC building crowd: It’s targeting gamers who want a blazingly fast gaming PC with top-end components, that looks a little different and is prepared to pay for it.  I’d happily replacing my current PC with the Omen X but in the harsh reality of the real-world, my budget doesn’t stretch to it, sadly [I’d have to do a lot around the house and buy a few bunches of flowers to score enough brownie points with my wife to even pluck up the courage to ask if I could buy one!]

It’s clear that HP’s Omen X isn’t aimed at everyone but for those with the money, the Omen X is a fantastic option in terms of computing power and interesting design.

My base in Astroneer is coming along nicely. To the left is the rover I created with extra storage attached to carry more resources. The blue lines radiating off structures are oxygen lines. If the Astroneer runs out of oxygen he, well, dies. The space ship is directly behind the Astroneer.

Astroneer is a space exploration/crafting/resource gathering game that’s in pre-Alpha. That means it a long way off being finished but it’s been my go-to game lately.

I don’t want to compare it to last year’s disappointing No Man’s Sky, because the two only share a few similarities, but Astroneer’s developers, System Era s Softworks, made the right decision by putting the game into Steam’s Early Access program. It cost me $24 and I have to say it’s perhaps the best $24 I’ve spent on a game in a long, long time. It’s also available on Xbox One and from the Windows store.

In Astroneer, you blast off from an orbiting space station and land on an uninhabited planet. There you use a space vacuum to suck up resources like resin, compound, copper, aluminum etc to build a base. As you explore, you’ll come across wrecks of space craft that you can scavenge for parts and resources as well as deep caves that while containing vital resources, often contain deadly plants that spew poisonous gas.

As your base gets bigger you can make things like a 3D printer that lets you print a rover so you can drive farther, weather vanes and solar panels to power all your equipment and, eventually, a space ship that lets you blast off and explore other planets in the solar system. 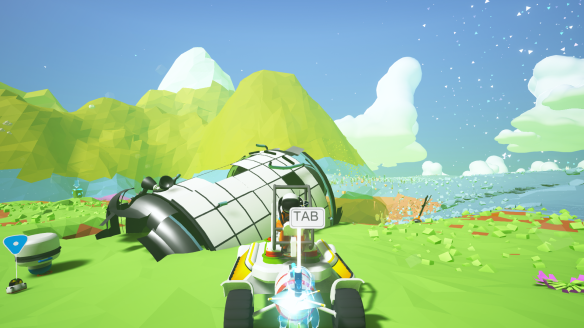 As you explore the planet, you’ll come across crashed space ships. They’ll often contain much-needed resources and parts that can be used on other vehicles.

It’s a hell of a lotta fun. I’ve got some videos here of my base in progress, driving the rover around and one of the randomly generated sand storms that will kill you pretty much instantly unless you’re hiding somewhere safe. Oh, it also has online co-op so you’ll be able to explore and create with a friend.

Astroneer isn’t perfect: It glitches out every now and then and my Astroneer has got stuck in structures forcing a restart, but dammit, if it isn’t fun. Even the way your Astroneer dies is comical: He can suffocate when he runs out of air and he sort of grabs his throat then spirals around, falling to the ground. It’s hilarious.

The developers have said the game could be in pre-Alpha for a least a year but they’re firing out patches pretty frequently to fix some of the problems people have encountered. I’ve noticed frame rate drops when I’ve got too many of the game’s tethers laid out and while my Astroneer is carrying a research item.

I’ve attached three game play videos I took while playing: The first one shows the progress of my base as I build; the second is footage of me driving a rover across a planet’s surface; and the third shows a violent storm as it ravages my base. I’ve seen video and photos of some people sculpting as variety of things using the game’s vacuum gun.

Look, I’m loving Astroneer and I’m excited to see where it goes in the coming months and see whether I can boldly go where no man has gone before …