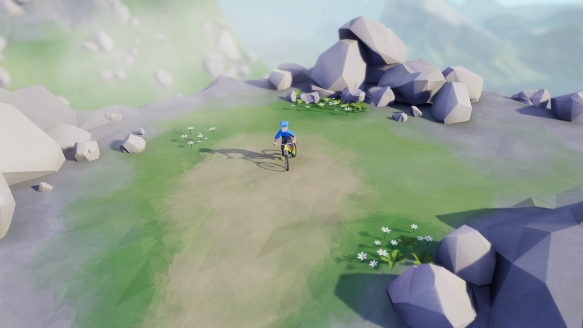 Two years ago, I was browsing through Kickstarter and was intrigued by a campaign for an as-yet-unmade mountain biking game called Lonely Mountains: Downhill.

Inspired by videos by riders like Danny MacAskill, German development studio Megagon Industries wanted to create a “mountain biking game in which the mountain is your only opponent and nature your only companion”. Fast forward two years and I can confidently say they have succeeded.

I plonked down 25 Euros ($NZ44) on the campaign, which got me a digital copy of the game, a digital art/behind the scenes book, an exclusive wallpaper and an exclusive poster, my name in the credits and the developers Megagon Industries, based in Berlin, Germany, would plant a virtual tree in the game for me.

My name’s in there as a backer. See if you can spot it? (Hint, second line from the bottom, sixth name from the left).

Megagon Industries was seeking 35,000 Euros and when the Kickstarter ended, they’d secured 45,042 Euros, and reached some stretch goals, too. I was backer number 274.

I think I was attracted to Lonely Mountains because I loved the low poly-aesthetic and I love mountain biking – and this would let me be more reckless that I would ever be on my real mountain bike (I’m too scared of crashing most of the time I go downhill these days).

This was the pitch: “Just you and your bike – take it on a thrilling ride down an unspoiled mountain landscape. Make your way through thick forests, narrow trails and wild rivers. Race, jump, slide and try not to crash – all the way from the peak to the valley!”

Now, 2019, the game is out and I’m loving it. A lot. It was originally slated for a mid-2018 release but development slipped. These things happen, you know. I wasn’t even worried: I actually forgot I’d backed it for a while. It was a surprise when the the Steam key landed in my inbox.

Off the bat, Lonely Mountains looks gorgeous. I love the low-poly asthetic that gives it a real unique look and feel. The environments, too, are just vibrant: Full of life and colour. I mean, look at this shot (I stopped my rider there purposely, so he could look at the waterfall below). Impressive, right?

I’ve said it before but Lonely Mountains really does let me be more adventurous that I would ever be on my real mountain bike. While I’m able to climb hills OK when it comes to the downhills, I tend to ride the brakes more than I should. Lonely Mountains lets me sprint, jump and slide to my heart’s content without any fear of injuring my ageing body.

Talking about injuries, I’ve crashed a lot in Lonely Mountains: a helluva lot. Megagon said we would. Despite smacking into numerous trees and rocks (which puffs of pixelated blood), my little rider dusts himself off – and restarts at the most recent checkpoint.

I wouldn’t be surprised if I’ve already smacked into the tree that Megagon Industries planted for me. Keep an eye out for it, will you? It’ll be the one with lots of pixelated blood on it.

The thing I like about Lonely Mountains is that it rewards persistence.

At first, each new trail – like real mountain bike trails – is an unknown quantity, unfamiliar. You take it cautiously (well, I tend to), braking on every corner, following the suggested path. The more you ride that trail, though, the more confident you become: You notice shortcuts between stands of trees or around a clump of rocks. You notice little things that shave precious seconds off your time and get you to the finish just that little bit faster.

Another thing I like is that the in-game soundtrack is nature itself. It’s refreshing, to be honest, to play a game that doesn’t bombard your ears with an overly loud soundtrack.

If you haven’t already guessed, I’m loving Lonely Mountains and am slowly unlocking new challenges and trails. This is one Kickstarter I’m glad I backed.