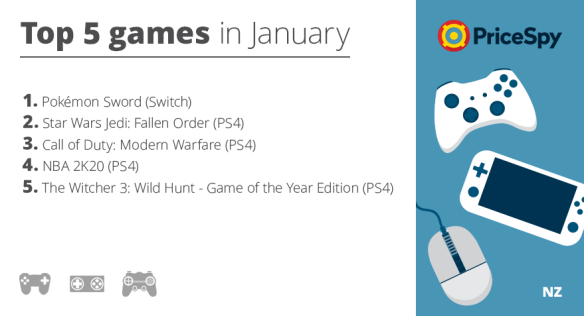 It seems a Nintendo Switch game has pipped the PlayStation for top game in New Zealand for January, 2020, with Pokemon Sword pipping EA’s SW Jedi Fallen Order for the top spot last month.

Rounding out the top five were COD: Modern Warfare, NBA 2K20 and The Witcher 3: Wild Hunt – GOTY Edition (all on PS4).

Liisa Matinvesi-Bassett, New Zealand country manager for PriceSpy, says: “Based on our historical click data, even though four out of the five most popular games for January were found to be from PlayStation, the overall most popular game was Pokemon Sword for Nintendo Switch.

“Pokemon Sword launched in November 2019 with an RRP of $99.  Normally, after two to three months after a game has launched, we would expect to see it drop significantly in price, so help it appear more competitively priced against other new releases and to encourage further sales to occur.

“However, according to our historical pricing insights, despite Pokemon Sword being almost three months old in January, the price point remained fairly static, dropping just 12 per cent compared to the RRP price at launch.

“The same cannot be said for the other top four games from PlayStation.  For example, even though Star Wars Jedi: Fallen Order launched around the same time as Pokemon Sword, our historical pricing data in January revealed it dropped in price by almost 40 per cent (39 per cent) compared to its RRP at launch.

“Similarly the third most popular game in, Call of Duty: Modern Warfare, also offered gamers a rather attractive 39 per cent off its original RRP in January.”

“Based on these findings, consumer demand for Pokemon Sword still remains to be fairly high, without the need for Nintendo to discount the product to entice consumers back in.  PlayStation on the other hand seem to be using a different tactic, offering gamers the opportunity to pick up a relatively new game at a bargain price a few months after release,” says Matinvesi-Bassett. 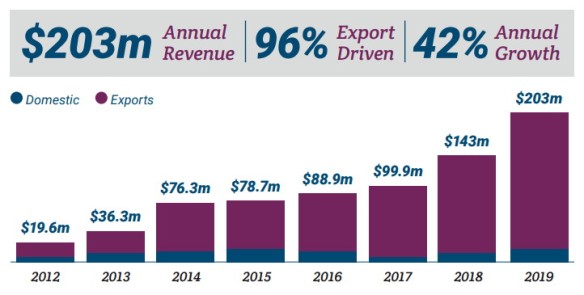 Looks like things are on the up and up for the New Zealand video games development industry, with the sector earning $203.4 million dollars during the 2019 financial year – double the $99.9m earned only two years earlier in 2017.

The figures come from the annual NZ Game Developers Industry Survey conducted by independent researcher Tim Thorpe and is for the financial year ending 31 March 2019. It canvassed 39 interactive, gaming, virtual reality, augmented reality and edTech companies. The 10 largest studios earned 93% of the industry revenue, employed 77% of the workforce and are now 10 years old on average.

“Our opportunity is to support the next generation of creative tech companies to join them,” she says.

The companies involved in the survey employ 683 creative and hi-tech workers, an increase of 133 new jobs this year. A Creative NZ and NZ On Air study, A Profile of Creative Professionals 2019, found that game development was one of the best paid creative occupations in the country and 31% of the roles in the industry are programmers, 29% are artists, 24% for game designers or producers, 12% for management or marketing.

Nearly half of the studios (47%) said that skills shortages were limiting the growth of their business – and this had intensified since last year. Gender diversity remains a concern for the sector, with 21% of employees identifying as female or non-binary, and attracting early stage development funding and attracting investment for expansion continue to be the biggest growth challenges to the industry.

When I used to write full-time for a living (a few years ago now), I had a wee bit to do with several NZ game developers and was impressed with what I saw, especially from studios like Flightless, based in Mt Maunganui (RTS game Element, Doomsday Vault & Bee Leader) and Sidhe (now called Pik Pok),  and I had a tour of the Grinding Gears studio a few years back. Here’s to a strong future to all Kiwi game developers.