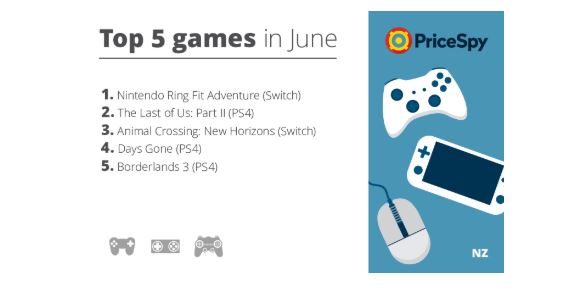 Price aggregation site PriceSpy tells me that Nintendo’s Ring Fit Adventures claimed the top spot for as most clicked-on game for the second month in a row.

Liisa Matinvesi-Bassett, New Zealand country manager for PriceSpy, says:  “Over the past few months, we’ve certainly noticed more of a presence from Nintendo Switch games placing amongst the top three spots on our popularity board.

Martinvesi-Bassett says:  “Based on the total number of clicks received, despite launching in October last year, June’s most popular game was found to be Nintendo Ring Fit Adventure.

“Whilst price drops can often attract gamers to click more on older game releases, we believe this not to be the case for the rise in popularity for Nintendo Ring Fit Adventure, as the price point has remained fairly static since it first launched.

“Instead, a big contributing factor that may have led to the rise in popularity for this particular game is Covid-19 and lock down, as people had to stay in and they wanted to stay active and feel motivated.”

Martinvesi-Bassett says it was reported globally that Nintendo Ring Fit Adventure was sold out, which most likely occurred as a result of all of the lockdowns that were taking place. “Such news most probably also contributed to the increased consumer demand here in New Zealand,” she says.