HP’s Omen gaming laptops have always been solid performers when it comes to gaming hardware.

I’ve always been a fan of its gaming line-up and after spending time with its Omen 16 laptop, I’m even more of a fan of the hardware.

The Omen 16 has a chonky 200w charger that ensures enough power to the innards and the Omen 16 really does look smart, with a great build quality and an appearance that doesn’t outlandishly scream: “I’M A GAMING MACHINE, EVERYONE.” It’s subtle in its design.

Connection-wise, on the the left side we have the power socket, a hinged ethernet port, USB-A 3.0, HDMI, USB-C with thunderbolt, a mini display port, the headphone jack and an SD card reader. The right hand side has two USB 3.0 ports.

Primarily aimed at the gaming market, the Omen 16 has a huge mesh grill on the underside of the chassis, letting you catch a glimpse of the substantial cooling system. Raised rubber feet mean the cooling fans have plenty of airflow and ventilation to keep things cool. It’s hefty in the hand but passes the backpack test.

HP is known for cramming it’s laptops with bloatware – and sadly, there’s a fair bit of it here in the Omen 16. I counted no less than eight HP programs (not including the HP specific Gaming Hub software) plus perennial bloatware antivirus McAfee and a trial for ExpressVPN. McAfee was the most annoying of the bloatware with it’s constant nagging but thankfully its reminders can be disabled. Frankly, the amount of bloatware is too much, HP.

System boot up from cold to the load screen was 14 seconds thanks to the SSD with Intel’s Opthane software and showcasing its gaming credentials HP’s Gaming Hub software lets you tweak the hardware to eek as much performance out as you can or change the lighting under the keys.

For example, you can under volt the system – where you reduce the CPUs core voltage without reducing the CPU’s performance) – meaning less power consumption and heat. There’s also balanced or performance modes, and an in-build graphics switcher so you can flick between the integrated graphics and the discrete RTX3070 GPU to ensure you’re getting the best graphical power when you need it the most.

Right, onto the bench marking. Let’s play some games on this thing.

I tested the Omen 16 with bench marking tools Cinebench, Catzilla, Heaven and 3D Mark (Timespy & Firestrike) and using the in-built benchmark tools in Batman Arkham Knight, Red Dead Redemption 2 and Shadow of the Tomb Raider. I also played God of War and RDR 2 a fair bit because, well, I just like those two games a lot.

As you can see, 3D Mark’s Firestrike demo returned a score of 18.063 and Timespy a score of 1112, and Tomb Raider returned an average frame rate of 123 frames per second with nVidia’s DLSS set to Quality mode and using DirectX 12. Unfortunately, I don’t have my bench mark images for RDR 2 or God of War as I, ahem, accidentally deleted them from a USB stick when I was clearing out unwanted data – and I’ve already sent the laptop back.

Suffice to say, it performed nicely with Red Dead Redemption with a mix of quality settings, same for God of War, although I noticed periodic slow down in the latter sections of the game, especially when there were a lot of enemies on screen. It didn’t last long but it was noticeable.

I also felt that performance dipped a little when on battery power (the system seems throttles a little to conserve battery life) but that’s to be expected. As I do with all laptops that are desktop replacements, I’d recommend to keep it plugged into mains power when you are gaming. This isn’t one for extended gaming sessions at the cafe if you’ve left your charger at home!

Look, HP’s Omen 16 does what it says on the box – and it does it very, very well. In fact, it’s probably the best performing gaming laptop I’ve reviewed on this blog.

It’s well built, has good battery life, has a good screen and performances extremely well with any game I threw its way. HP also tells me that the Omen 16 uses recycled plastic for the key caps, recycled metal and ocean-bound plastic for the speaker enclosure.

That said, it’s not cheap but decent gaming laptops never seem to be, right? The Omen 16 starts from $NZ4,699, depending on whether you go for an Intel CPU or AMD processor, and the review configuration – if I’ve read things correctly – would set you back about $NZ5499. That’s a fair chunk of change.

However, if I was looking for a more portable gaming machine to replace my desktop PC – which I partially rebuilt last year with a new motherboard and Intel 11th Gen i5 CPU – I wouldn’t hesitate to put the HP Omen 16 at the top of my list.

PNY Director Sales, ANZ & Oceania Richard Clarke says the HP products are PNY’s major and continued commitment to launching high-quality memory products into New Zealand and Australia. “They are the first of many across the entire HP memory product range that we will launch local,” he says.

All four USB sticks are available from JB Hi-Fi across New Zealand and Australia.

As soon as I took HP’s Spectre x360 hybrid out of the box, it was the little touches that impressed me.

The braided power cable that looks high-end and the premium look and feel all screamed high-end hardware, and HP’s x360 is just that: It’s a premium piece of kit at a premium price – but you do get two devices for the price of one, though.

In standard configuration, the device is a standard laptop but flip the screen back and stand it on a benchtop like a tent and it’s a touch-screen tablet, complete with a stylus that is incredibly sensitive and accurate [Funny story: I thought I’d “misplaced” the stylus for about a week after my wife thought it was a marker pen & put it away with the other markers].

I do have to confess, though, it took me a while to find the power button as it’s not in the traditional place I was looking. It’s not on above the function keys on the right hand side It’s in the left corner, tucked out of sight. While uncertain about its placement at first, I’m now a convert of where the power connector is as it means it’s out of the way and you won’t knock it easily.

Running an Intel Core i7 10th generation CPU (1.3Ghz), 16Gb of memory, 512Gb M.2 drive for storage, 64-bit Windows 10, and an Intel Iris Plus integrated GPU, the x360 has enough grunt to do most things. Thanks to a fast fingerprint scanner [as well as facial recognition: How did they get a camera into the incredibly think bezel this thing has?], the x360 unlocks amazingly fast and boots up from cold start to desktop in a matter of seconds [around 6 seconds]. 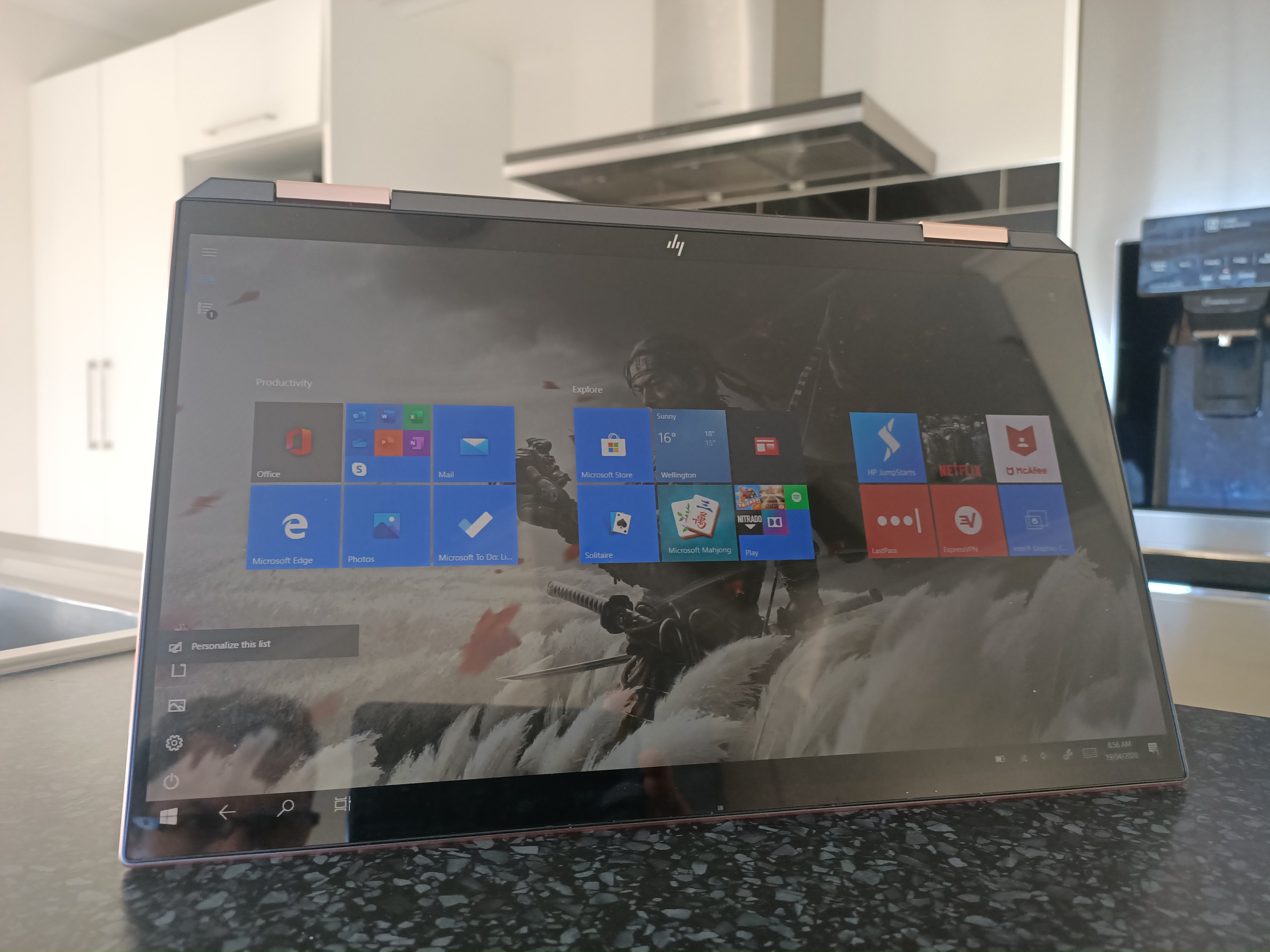 The x360s screen does reflect quite a bit off its surface so you’ll have to take care in well-lit rooms.

The 13.3-inch AMOLED panel (1920 x 1080 resolution with a 60hz refresh rate) is clear and vivid, although it reflects a lot of glare when used in direct sunlight or in sunny rooms so it’s not really one for sitting on the deck during a warm summer afternoon.

Weighing in at  reasonable 1.2kg, the x360 comes with an old-school USB 2.0 connection on the left-hand edge (which is good for my wireless mouse dongle) and another USB-c connection on the right-hand side. There’s also a micro-SD port and an audio jack. A nice touch is the physical switch to deactivate the in-built camera, a nice feature if you’re super cautious about online safety.

I usually struggle with many laptop keyboards but I found the x360’s keyboard comfortable to work with, with nice travel in the keys. I set myself the challenge of using it as my primary device [excluding my work laptop] for a couple of weeks, and for the most part I succeeded.

I still game on my more powerful desktop PC, but I wrote this review on the x360,  I watched YouTube videos and Netflix on the x360, I followed recipes during lock down baking with the x360. It was my go-to device for the past couple of weeks.

The keys on the x360 have nice travel to them and you can just make out the physical switch (next to the microSD port) that lets you disable the camera.

While not a dedicated gaming machine [I understand there is a version that comes equipped with an nVidia GTX1060 GPU], I wanted to test out the x360’s gaming chops and while it managed to play games like Lonely Mountains Downhill, Blade Runner (the GOG version), Tomb Raider, Dishonoured and Two Point Hospital at playable frame rates, it struggled with a game like Forza Horizon 4, though, giving me an unsupported video card warning.

If you’re a gamer, I wouldn’t recommend trading in your current gaming rig for the x360, especially if you’re keen on Doom Eternal or the upcoming Cyberpunk 2077.

I was impressed with the x360’s battery life, lasting much longer than I expected before needing a recharge: I got, on average, a couple of days moderate use before needing to plug into a wall socket.

The only issue I had, hardware-wise, was the panel flickered quite severely when I was watching streaming services like Netflix and YouTube. It flashed so badly that it even looked like the panel itself was dying. Fearing it was a major problem, a quick search using Dr Google suggested a graphics driver update then heading into the graphics control panel and disabling panel self-refresh would sort the problem. It did, thankfully.

Starting at $3159 (depending on the GPU configuration), HP’s Spectre x360 is reasonably priced considering pricing of equivalently spec’d laptops such as Dell’s XPS 13 ($3299).

For me, the Spectre x360 is one of the best HP laptop’s I’ve used and it’s a powerful 2-in-1 that should be able to do everything you throw at it, apart from serious gaming, mind you.

Thanks to HP in New Zealand for providing the review unit.