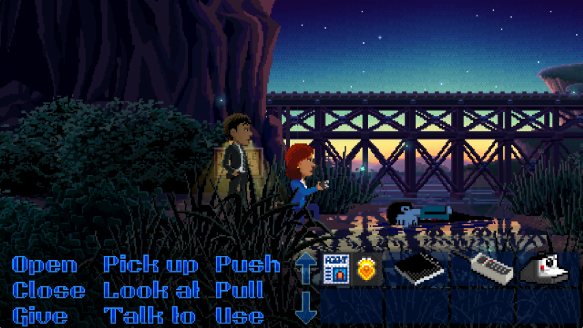 About 20 minutes ago I finished Thimbleweed Park, the crowd-funded point-and-click adventure game from veteran game makers Rob Gilbert & Gary Winnick, and all I can say is: When can I sign up for the next game from these two?

It says something about the quality of the game and how much you enjoyed playing it when you really, really, really, really hope the game makers have got another idea in the pipeline. Put it this way: I’d plonk down $US20 in a heartbeat to back another game from Ron Gilbert & Gary Winnick

I mentioned in a previous post that during my play through that the puzzles hadn’t proved too taxing. As the game nears completion things get a little tougher but they’re nothing insurmountable.

I have to admit, though, in a panicked moment when a character suddenly became unplayable and was holding an item another character needed I reached out to Ron Gilbert on Twitter as to what I should do and whether the character would return. “They will be … just wait,” he replied.

He was right. Not long afterwards the character returned and everything fell into place. I felt like a real chump, if I’m being honest, but it speaks volumes to Gilbert that he was willing to answer such an inane question from me. He must have thought I was a right plonker.

If you’re a fan of classic point-and-click adventure games like Monkey Island, Full Throttle and Maniac Mansion, then Thimbleweed Park is a real trip down memory lane and a no brainer at $NZ23.99. It was 12 of the most enjoyable hours I’ve spent playing a video game.

Oh, and if you do buy it  and play it and enjoy it, for the love of Pete, sit through until the game’s end credits have finished: There’s a sequence that will bring a smile to the faces of gamers who cut their teeth on computers like the Commodore 64 and old school games (I had to make do with a Sinclair Spectrum and an Atari ST but I still categorise myself as one of those old-school gamers).

So, Ron Gilbert & Gary Winnick, when do we hear more about your next game?

I’ve become a little disillusioned with the current state of the games industry.

Well, perhaps disillusioned is the wrong word: I’m getting less and less joy out of so-called blockbuster games that involve teams of hundreds of people and budgets of many millions of dollars, and finding more and more enjoyment out of games that are innovative, try something different and are made by much smaller teams with much smaller budgets than the Call of Duties, the Assassin’s Creeds, the Mass Effects.

The Stanley Parable: a game that will mess with your mind.

That’s not to say that I dislike AAA games. I enjoyed Naughty Dog’s The Last of Us and most of Assassin’s Creed IV Black Flag was fun, but the games that give me the most gaming pleasure last year and I got the most fulfillment out of were games like The Stanley Parable, Brothers: A Tale of Two Sons, Thomas Was  Alone and Gunpoint,  as well as a whole host of games that I bought through the thoroughly wallet-unfriendly Humble Indie Bundle.  (After days of internal debate, I caved and bought the latest Humble Indie Bundle. I didn’t need it, and should be saving money, but I couldn’t help myself. I got nine games for $US5.40!)

My teenage son doesn’t get indie games. He’s a AAA gamer all the way. I had a discussion (it was probably more an argument) with him the other day and he can’t understand why I like indie games so much. He seemed to think that indie games showed little imagination and weren’t hard to make at all. I disagreed, saying that indie games actually who a lot more imagination that many games around and they’re actually harder to make than he thought. We ended on a stalemate, but I’d still play an indie game at the moment than a triple A one, and big-name development studios and partners could learn a lot from independent developers.

And, despite naysayers saying PC/computer gaming is dead, most of the games I’m playing lately have been done on my desktop computer or my Macbook Pro.  In comparison, I think I’ve turned on my Xbox just once in the past week – to finish ACIV and enter a points code that my daughter gave me for Christmas – then turned it off once I was done.  I can’t remember the last time I actually played anything on my Xbox One. The new generation of consoles just aren’t grabbing me at the moment, so I’d rather download games onto my PC (and, happily, some of the games I own on Steam actually have Mac versions which I can download onto my Macbook) and play them on that.

Somewhere over the past few years – I don’t know exactly when –  the games industry seems to have dumbed down games. I don’t mean that developers are treating gamers as if they’re stupid but it seems to me that lazy publishers have got wise to the fact that they can milk a franchise for all it’s worth – Call of Duty is a case in point  –  generally regurgitating the same game play mechanics time and time again, year after year, and know that fans will still buy the game.

Assassin’s Creed is falling into the same trap and there will be countless others. I’ve had enough of games that should have been put to pasture two games ago and am gravitating more towards games that try something different and give me something compelling and different. I’m tired of being a well-armed super commando who kicks alien but in his quest to save the galaxy/damsel.

I guess it was my move towards more independent games that made me so intrigued by Tim Schafer’s Kickstarter pitch a couple of years ago for a game that seemed to return to the traditions of the old-school point-and-click adventure that he was famed for. Games like Grim Fandango, Full Throttle and the Monkey Island series. Games that somehow have lost favour with today’s new generation of gamer who prefers high-tech weapons and Quick Time Events than puzzles that will test them and laugh-out-loud dialogue.

I’m a gamer that grew up on point-and-click adventures – Grim Fandango and Full Throttle are two of my most treasured and I still have copies of them sitting on my hallway bookcase –  so when he announced that he wanted to try something similar with his Kickstarter, my heart heaved and I was excited.

So, I backed it. And now it’s  here. Well, part 1 of the game that was Codenamed Reds but is now called Broken Age is here. And it’s a lot of fun, although I’m not sure it’s going to become a classic point-and-click game like some of Schafer’s other games.

The whole process of the development of Broken Age, from its Kickstarter funding to where we are now, is an interesting one and the documentary series available to backers showed just how tough a process it was. Schafer’s Kickstarter raised something like $4 million (he was asking for much, much less) but it seems that even that figure wasn’t enough to fund the vision that Schafer had, hence the decision to break up Broken Age into two parts. Sales of Act 1 from non-backers will go towards finishing Act 2 and the full game.

Visually, Broken Age is gorgeous to look at. I know the term “hand-painted” is bandied around a lot in video games, but this game really does have a story book-like quality to it. Almost painterly in its look. I like it. Central to the game are two characters, Shay and Vella, two very different people but with very similar lives ( You can swap between the two at any time by clicking an icon in the game’s inventory bar that sits at the bottom of the screen, but I didn’t: I played through each story separately. It just seemed to me to be the best way to play it).

Shay (voiced by Elijah Wood) is a young boy turning into a man who lives on a space ship controlled by a motherly computer (voiced by Mass Effect’s Jennifer Hale) who does everything it can to keep him from harm. His days become monotonous routines of which cereal to have for breakfast or whether to rescue cute knitted things from an ice cream avalanche or a runaway train, or investigate a strange anomaly on the exterior of his ship.

Vella, on the other hand, is a young girl who lives in a seemingly nice place called Sugar Bunting. Things aren’t as they seem, though, and she’d probably quite like Shay’s mundane routine: She’s due to be sacrificed to a giant monster, as is the tradition in her village.

I have to say that I found the first 20 minutes or so of Shay’s story incredibly boring and was close to quitting, but I’m glad I didn’t. I realise why the first moments were so mundane and repetitive: It was to emphasise how the motherly computer determined Shay’s every move but stick with it, as once you break the routing (it’s pretty clearly signposted on how to do it) the game opens up and is much better for it.

The Space Weaver: Perhaps the most interesting character in Broken Age.

Unlike a lot of Schafer’s previous works, the puzzles in Broken Age (at least in Shay’s story: I haven’t played Vella’s yet) are pretty simple and signposted so that you shouldn’t have trouble solving them (although the Space Weaver one had me scratching my head for a few moments until the Space Weaver – the ship’s navigator – pretty much indicated what to do).

That disappointed me a little.

I guess I was hoping for some of the mind-bendingly hard puzzles from Schafer’s earlier work, which I’m sure a lot of other backers were hoping for, too, but they aren’t here. I guess this is a game for a new breed of gamer.

Some of the puzzles are quite inventive, though, but they just won’t have you pulling your hair out.

Perhaps my biggest criticism of Act 1 of Broken Age is that it’s not as memorable as, say, Grim Fandango or Full Throttle. As gorgeous as each screen looks, most of them are filler, with only a few things you can actually click on – and many of those clickable items just provide a commentary from Shay or Vella (the so-called Junk Room on Shay’s ship is a case in point).

There also aren’t a huge numbers of characters to interact with, and Shay’s ending feels really disjointed – it ended abruptly – and feels like Double Fine just sliced it off. Obviously, this is because of how Double Fine is handling the funding for the next Act but Shay’s ending left me confused.

Can I recommend you buy Act 1 of Broken Age? It’s a hard one.

It’s a nice adventure from what I’ve played but without know how Act 2 pans out, it’s a hard one to say you simply must buy it. It’s not as memorable as Grim Fandango or Full Throttle, that’s for sure. I still remember playing those games all those years ago: I’m not sure Broken Age will have that impact on me – but I think that’s because of the Act 1 and Act 2 thing.

One thing I do know, though, is that Broken Age is a game that has Tim Schafer’s DNA scattered all through it and the gamer part of me likes that. Whether that’s enough to ensure funding for the next act, I’m not sure, but I hope enough people buy Act 1 so we can all find out.