Thanks to PlayStation NZ, I’ve got an early review copy of the remake of Team Ico’s classic PlayStation 2 game Shadow of the Colossus, which I’m playing through at the moment (I’ve also played it on PS2 and PS3), so I thought I’d share the opening cinematics of the remake with you.

Captured on a PS4Pro, the game has been remade for Sony’s current generation console thanks to the remaster masters, Bluepoint Games, who have done other PlayStation games in the past. Look out for a review in the next week or so.

The Last Guardian is about a boy and the dog/bird/eagle he finds himself with and their journey together.

The game starts with the unnamed boy, covered in weird tattoos, lying next to the  wounded dog/cat/eagle, a shackle around his neck, chaining him to the ground. It’s rocky relationship to start with: The boy has to gain the trust of the creature by removing spears from his feathery hide and find him food, but as the relationship develops, the pair find they need each other to negotiate the game world and escape. Before too long the pair are inseparable, relying on each other to survive. It’s a story of survival and friendship.

Trico is undoubtably the star of the show: He’s a marvellous creation that exhibits behaviour unlike any video game animal I’ve seen before. He behaves and acts like you’d expect  say a cat or dog to: He cautiously puts a paw forward as he enters a room he’s not sure about, his eyes glowing brightly and wide open; He’ll suddenly scratch behind an ear, feathers fluttering around; He’ll jump backwards and forwards across towering pillars as he tries to keep an eye on you as you negotiate a puzzle; He’ll jump up and down in excitement after wiping out a troop of the game’s glowing eyed, armour-wielding warrior dudes out to get you.

He bellows and roars when he’s hungry and agitated, his eyes glow depending on his mood.  He cowers in fear when confronted by strange glass “eyes” until you’ve smashed or destroyed them. Trico is remarkable, remarkable beast and one that I quickly became very fond of. 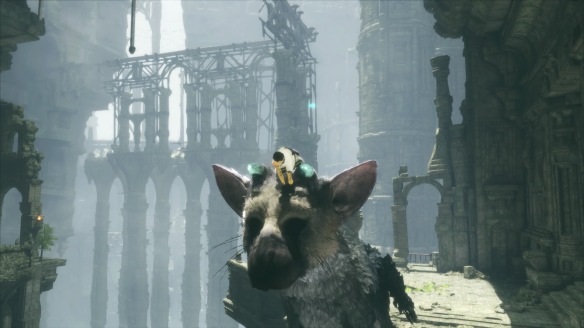 At times, Trico is stubborn and unpredictable. Just like my dog Drew.

Well, that might work in the real world where I accept I have to deal with my dog’s stubbornness,  but I play video games to escape the real world, not to face the same problems I face with my dog in real-life.

Trico’s stubbornness really came to the fore in two puzzles in the game involving water: Both took multiple attempts to solve – and a couple of complete restarts of my PS4 to kickstart the AI – before Trico actually decided to play ball and do what he was supposed to do.  I was literally yelling at him to do what I was telling him. These two puzzles became a frustrating trial-and-error scenario where he just refused to do anything I told him. Frankly, it shouldn’t be this hard to control a video game animal.

Look, situations like this didn’t make me like the overall experience of the game any less, but it did mar the experience at little and frustrate the hell out of me. 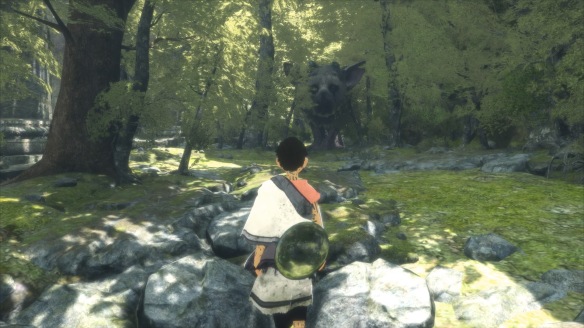 One of the other annoyances in the game is the camera.  Frankly, at times it’s a bastard, often obscuring your view so you can’t actually see what’s going on or where you have to go, especially in a tight spot where a jump is required, or zooms in so close to the action that your screen turns black, blocking your view.

For a game that has been in development for so long, there was plenty of time to get the camera right. Again it didn’t ruin the overall experience for me,  but I’d be lying if it didn’t frustrate me a lot and have me  yelling at the screen sometimes because I just couldn’t see what the hell was happening, especially when I was trying to guide the boy back onto Trico’s back while being attacked by armour-wielding warrior dudes that wanted nothing more than to kidnap me and pull me into the walls.

It’s strange: For every frustration The Last Guardian threw at me, something wonderful and magical happened next to calm me down.

The Last Guardian is a flawed game, there’s no denying that, and at times it shows its age and PlayStation 3-designed root (especially in some of texture work), but despite all of that, I can look past those flaws because  The Last Guardian is a beautiful game that tugged at my heart-strings with its telling of an incredibly emotional journey of boy and dog/bird/eagle thing. The more I played, the more I loved Trico and his mannerisms, frustrations and all.

Something that took my breath away  was the sheer scale of the game, too: You can’t help but be impressed with director Fumito Ueda’s direction when you look at the size of the structures and environments of the game, especially when the boy is standing at the top of a massive tower and you see what lies beneath you.  The sense of scale is immense and you really do feel as if you’re clambering about a massive centuries-old forgotten city with crumbling towers, delapidated buidings and ruins.

Animation of Trico and the boy are also impressive, too, with Trico’s mannerisms so lifelike that you’d think you were watching your own animal (if you have one). It’s those little touches that give Trico and the boy those real-life qualities.

The Last Guardian is a flawed game, and I’d be lying if I said you won’t get frustrated playing it, because you will, but play it for the amazing story of friendship and adversity between a boy and a dog/cat/eagle thing and you’ll find a game that has a lead character that will capture your heart like it did mine and take you on a rollercoaster ride that will have your emotions on edge.