The revamped Samsung Galaxy A5 smartphone.

While it’s probably been lost in the recent announcement of Samsung’s soon-to-be released Galaxy S8, Samsung has quietly launched a revamped Galaxy A series.

Aimed at the mid-priced point is the Galaxy A5 , which has an RRP in New Zealand of $749, and it’s clear it’s taken a lot of design cues from Samsung’s flagship Galaxy S7 smart phone. The two phones look remarkably similar in design, albeit with a few subtle differences.

Sure, the S7 feels a lot more premium and high-end than the A5 but, you know what? Samsung’s new 2017 phone is now slouch in the design department and put them side by side and at a glance, you’d have a hard time working out which was the cheaper model. The A5 actually has a slightly larger display than the S7, too.

Running Android 6.0.1 (Marshmallow), the A5 has been tweaked over the old model: It has a 5.2-inch Super AMOLED screen (1280×720 resolution), powered by a 1.9GHz Octa core processor and 3Gb of RAM (up from 2Gb in the previous generation A5). Internal storage is locked at 32Gb but it’s upgradable via microUSB (upto 256Gb). The Galaxy A5 is part of a three-phone line up, sitting between the 5.7-inch Galaxy A7 and the 5.3-inch Galaxy A3.

Samsung has moved the speaker grille to the top right hand side of the chassis (it’s now next to the headphone jack on the S7), just above the power button, and uses a USB-type C connection for charging.

As is common these days, the A5 has a non-removable battery, rated at 3000mAh. The new season A5 now has 16MP cameras, front and rear (an upgrade from the 13MP and 5MP of the previous A5). Like previous late-model Samsung phones, the A5 seems to have less bloatware pre-installed, which is always a good thing in my book.

I have to say that despite being a “budget” handset, the Galaxy A5 felt really solid in my hands. It had a high-end finish, which is nice in a smart phone that sits mid-range in Samsung’s new line-up, and it just felt comfortable holding it, although the back is quite slippery. 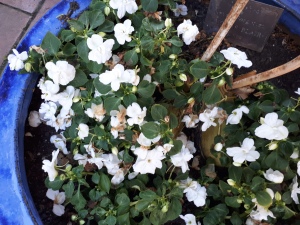 The Galaxy A5 handled snapshots with ease.

The Galaxy A5 took good photos thanks to its 16 MP camera. For no reasons, here’s a photo of my dog resting.

Thanks to the Octa core CPU, the user interface (UI) was snappy enough swiping through screens and the camera produced some pleasing results and I got probably a day out of it before needing a recharge. It’s clear, though, that the screen just isn’t as sharp as the Galaxy S7’s sharper display, which offers higher resolutions.

A quick glance over Pricespy shows that a Galaxy S7 can be had for as little as $693 or as much as $1203 (chain electronic retailers were priced around $999 for the S7 handset) and another online aggregation site had the A5 ranging from $$498 right up to $749 so it can be found cheaper than Samsung’s RRP. If you can find it cheaper, then I’d go for it if you’re keen: Why pay full retain, right?

The bottom line is if you don’t need all the bells and whistles that you’ll find in Samsung’s top  models, such as the Galaxy S7 and upcoming Galaxy S8, then the Samsung A5 will fit the bill nicely(as will the entire A line-up). It’s a great looking phone that’ll do everything you need it to, and that’s sometimes all you need in a smart phone.