What did you do over the weekend?

Me? Well, I drove a Mercedes AMG C 65 to Australia’s famous Twelve Apostle’s landmark, nestled in Sydney’s Byron Bay. I drove a Lamborghini Urus 4WD around a whole lot of wrecked ships off Silver Sands. I raced a Fiat  Arbarth across dirt roads (it was hardly a contest): I won easily. I admired the amazing Parkes Satellite Arrays, taking in the wonder. I drifted a Holden Maloo ute around an outback road. I saw fireworks in the skies of the Gold Coast.

I also took out several wire fences when drifting around corners went awry, sideswiped a few cars and had some near misses with cars as I screamed through Byron Bay. Oh, I also drove to the Gold Coast (from Sydney. In a few minutes!) and unsuccessfully tried to drift through a car park. I loved every minute of it.

Ok, confession time:  I didn’t really do all this in real-life, I did it in Forza Horizon 3, the best racing game I’ve played in a very, very long time.

It helps that Forza Horizon 3 is stunning, too The car models and environments are gorgeous, but it’s at sunset and night-time when the visuals really step it up a notch.

I crashed into a tree more than once just because I was distracted by the stars in the night sky. Forza Horizon 3 looks so good, so inviting, that It made me want to be right there, right now driving along the Great Ocean Road, taking photos with the Twelve Apostle’s in the background, looking for those shipwrecks. Trans-Tasman rivalry aside, fair dinkum, Forza Horizon is essentially a tourism promotion for Australia (although, to be fair, I still don’t like the Gold Coast much).

Forza Horizon 2 was a fantastic racing game and was always going to hard to beat but, personally, I think Playground Games has done it with Horizon 3. It builds on what made Horizon 2 so wonderful and sets in the giant playground that is Australia. For us Antipodean gamers, too, it’s nice to be driving on the left hand side in a racing game for a change!

Forza Horizon 3 starts out with a crazy stunt that sets the scene for the mayhem you’ll experience throughout the game: It’s you, driving an ATV buggy against another driver. Nothing unusual in that – except the other driver’s buggy is dangling from an Australian Air Force helicopter and you have to beat him to the finish line!

Like Horizon 2, the game revolves around the Horizon festival, with you festival boss tasked with growing the fan base and the size of the famed car festival so it attracts the best drivers in the world. Frankly, like I did with Horizon 2, I often just drive and drive and drive, exploring the game world and seeing what  can find.

Apart from visiting fantastic locations, you’ll be doing things like racing against the clock, recruit rivals to your ranks and competing against Drivatars, AI-controlled avatars (many of them based on your Xbox Live friends) that you can challenge. 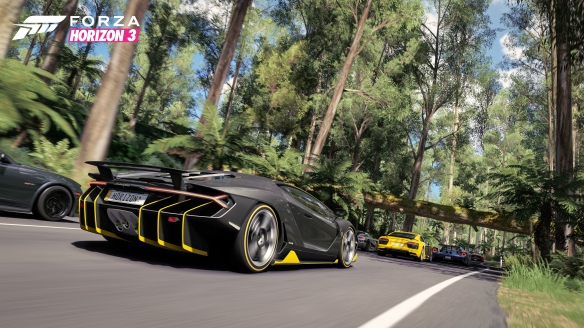 There’s a lot of freedom with Forza Horizon 3 (as there was with Horizon 2): Your GPS will often tell you the fastest route to reach a destination but often it’s much more fun to go off-road, plowing through fields and weaving through trees, than it is sticking to the tarmac. You won’t get penalised for doing that either: You earn XP by passing too close to cars and smashing fences and signs as well as driving safely and arriving at your destination with your car in tact.

Back is the rewind mode, which comes in handy if you take a corner too sharply in a race, causing your expensive supercar to side swipe a solid rock. I have to admit I did use it quite a bit in racing but I didn’t feel guilty about it.

Forza Horizon 3 has something like 350 cars and they’re stunning to look at – and they have an audio soundtrack to accompany the good looks. As I do with all racing games, I turn off the in-car radio stations so that I can hear the signature notes of the cars I’m driving. Having the thundering tones of an American muscle car filling the lounge room is a thrill to the ears!

I could rabbit on about Forza Horizon 3 for many more hundreds of words but frankly, if you own an Xbox One (or PC, as the game is part of Xbox’s Play Anywhere scheme) it’s a game that you need to experience for yourself.

And like Horizon 2 before it, Forza Horizon 3 it has the ability to keep you busy because there is just so much to do.

So, climb into your dream car, settle in and start driving.