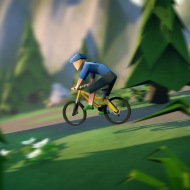 No doubt I’ve mentioned it before, but I’m a keen cyclist, both mountain and road, so when a Twitter friend (thanks @museste) let me know about Lonely Mountains, my interest was piqued.

Lonely Mountains describes itself as a “downhill mountain biking game for PC focusing on responsive and fun controls, an open level design and an untouched nature in a beautiful low poly style”.

I’m digging the art style and simplistic nature of Lonely Mountains, but apart from the trailer I don’t know much more about it, like how big will it be, how does progression through the game work and is there an online aspect .The game is being worked on my Berlin, Germany indie studio Megagon Industries founded in 2013. Two of the three-man team are working on Lonely Mountains, which is tentatively aiming for a 2018 release.

Lonely Mountains reminds me a lot of the game Trials HD, mainly because it’s a game where you ride a trials motorbike through a variety of courses, aiming to beat times and do tricks to earn points. Megagon says the game will feature custom bike physics, secret locations, tracks that you can ride from top to bottom without encountering a loading screen and open-world game play, meaning you can follow tracks or find your own way to the end point. All the screen shots show the game in a pre-Alpha state so there’s still a fair bit of work to go.

The developers say other potential features will include weather systems (snow, rain, wind), a dynamic day and night system, a replay & share system, and rider and bike customisation. As I said earlier, my interest is piqued and I’m going to follow the progress of Lonely Mountains closely.

Now, if I could only be as skilled on my mountain bike as the low-poly rider featured in the trailer …