Here are my thoughts so far on Prey, the first-person shooter set in space from Bethesda. I haven’t finished the game yet but thought I’d let you know what I thought from what I’ve played. I’m playing on Xbox One using a code supplied by Bethesda

If Prey has taught me one thing, it’s this: Be wary of coffee mugs.

You heard me right: Be wary of coffee mugs. And office chairs. And globes. And bath towels. You see, in Prey, sometimes items aren’t what they seem. They could be the game’s alien life form, called a mimic, that’s out to eat your face.

Set in the year 2035 on the Talos 1 space station (in an era when John F Kennedy wasn’t assassinated and Russia and the US are working together to build the first space station), Prey is, I guess, a re-imagining (of sorts) of the original Prey, with the player controlling Morgan Yu, a scientist/test subject who has to find out what has caused a breakout of the alien mimic life form. As we’ve seen in many games before Prey, Yu can’t remember what has gone before so as he explores the Talos 1 things and events become a lot clearer.

Prey has a real Bioshock/Half Life/Dishonored feel about – and I don’t think that’s a bad thing. Half Life because, well, the first weapon Yu finds is a wrench, Bioshock because Yu can upgrade his abilities (through a skill tree)  using augmentations called neuromods and Dishonored because the studio behind the Dishonored games – Arkane Studios – is also the developer behind Prey.

What follows is exploration and fetch quests as Yu wanders about Talos 1, trying to get to the bottom of what caused the mimic containment break. It’s an amalgam of several games, wrapped up into one. The mimics are the game’s enemies and smaller ones are black, spider-like creatures that can suck the life force from humans, causing them to multiply. They’re also incredibly fast and can often jump at you from nowhere. The wrench comes in handy with the smaller mimics but weapons like shotguns, a gun that fires blogs of glue and a pistol is handy against larger humanoid enemies like phantoms, which often have powers of their own and move incredibly swiftly. A nice touch are the service robots – called operators – that can be fabricated to repair your suit and heal you up. Another nice touch is that you can recycle all the junk you’ll inevitably pick up (lemon peels, scraps of paper, alcohol bottles) using recycling machines and turn them into materials, both organic and synthetic, that can be used to create equipment and weapons.

I have to admit that I jumped a few times while playing Prey. It’s not because it’s overly scary, because it’s not, but it’s because I just seem to wuss out when it comes to horror/survival games. I can watch horror movies no problem but horror video games? Man, I need to keep a spare pair of underwear handy. I guess it’s because with horror movies it’s easy to see what’s going to happen. With horror games, I genuinely find I have no idea what’s going to happen.

With no word of a lie, I stood outside the doorway of a room that was bathed in darkness for 10 minutes, not wanting to go into it, because I was worried some mimic was going to transform from a coffee mug into a spidery alien and try to eat my face. My fears are real, people. My fears are real.

I spent countless times – wrench at the ready – inching forward towards desks with coffee cups resting on them, worried one of them was a mimic. Someone I follow on social media said they found a desk with two coffee cups on it – and one of them rolled to the side, disappearing somewhere in the room. I would have lost it right there.

Eventually, Yu is able to scan the environment for mimics from a distance but, yeah, not knowing whether a coffee cup – or some other object – is actually what it appears to be is quite unnerving. 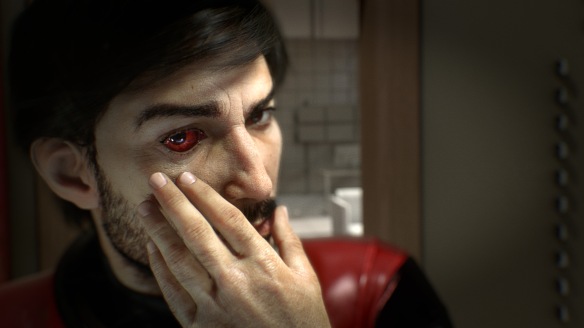 Missions are what you’d expect – go here and get a keycard that will open a door to another area, go to this room to recover something for someone who will give you a code for something – but there are  some interesting side quests that add to the back story to what happened on the Talos 1 before the mimic containment break. Talos 1 is also an interesting setting, too: It’s a living  space station with crew quarters, kitchens, reactors, medical rooms, cargo bays and nooks and crannies to explore. Prey’s story is an interesting one as well, set in a place where nothing is as it seems.

While nothing like the sequel to the original game (which came out last generation in 2006) that Human Head was working on before Bethesda canned it, so far Prey is a lot of fun that really has a Bioshock/Half Life vibe to it.

One thing is for certain: It’s made me look at coffee mugs in a whole different light.

2 thoughts on “Prey impressions: Did that coffee mug just move? DID IT JUST MOVE??”