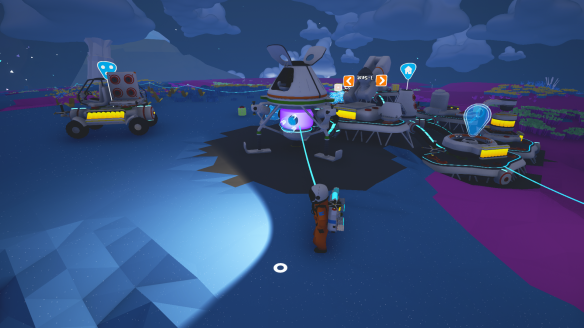 My base in Astroneer is coming along nicely. To the left is the rover I created with extra storage attached to carry more resources. The blue lines radiating off structures are oxygen lines. If the Astroneer runs out of oxygen he, well, dies. The space ship is directly behind the Astroneer.

Astroneer is a space exploration/crafting/resource gathering game that’s in pre-Alpha. That means it a long way off being finished but it’s been my go-to game lately.

I don’t want to compare it to last year’s disappointing No Man’s Sky, because the two only share a few similarities, but Astroneer’s developers, System Era s Softworks, made the right decision by putting the game into Steam’s Early Access program. It cost me $24 and I have to say it’s perhaps the best $24 I’ve spent on a game in a long, long time. It’s also available on Xbox One and from the Windows store.

In Astroneer, you blast off from an orbiting space station and land on an uninhabited planet. There you use a space vacuum to suck up resources like resin, compound, copper, aluminum etc to build a base. As you explore, you’ll come across wrecks of space craft that you can scavenge for parts and resources as well as deep caves that while containing vital resources, often contain deadly plants that spew poisonous gas.

As your base gets bigger you can make things like a 3D printer that lets you print a rover so you can drive farther, weather vanes and solar panels to power all your equipment and, eventually, a space ship that lets you blast off and explore other planets in the solar system.

As you explore the planet, you’ll come across crashed space ships. They’ll often contain much-needed resources and parts that can be used on other vehicles.

It’s a hell of a lotta fun. I’ve got some videos here of my base in progress, driving the rover around and one of the randomly generated sand storms that will kill you pretty much instantly unless you’re hiding somewhere safe. Oh, it also has online co-op so you’ll be able to explore and create with a friend.

Astroneer isn’t perfect: It glitches out every now and then and my Astroneer has got stuck in structures forcing a restart, but dammit, if it isn’t fun. Even the way your Astroneer dies is comical: He can suffocate when he runs out of air and he sort of grabs his throat then spirals around, falling to the ground. It’s hilarious.

The developers have said the game could be in pre-Alpha for a least a year but they’re firing out patches pretty frequently to fix some of the problems people have encountered. I’ve noticed frame rate drops when I’ve got too many of the game’s tethers laid out and while my Astroneer is carrying a research item.

I’ve attached three game play videos I took while playing: The first one shows the progress of my base as I build; the second is footage of me driving a rover across a planet’s surface; and the third shows a violent storm as it ravages my base. I’ve seen video and photos of some people sculpting as variety of things using the game’s vacuum gun.

Look, I’m loving Astroneer and I’m excited to see where it goes in the coming months and see whether I can boldly go where no man has gone before …